Margaret Wheatley began caring about the world’s peoples in 1966, as a Peace Corps volunteer in post-war Korea. In many different roles — speaker, teacher, consultant, advisor, formal leader–her work has deepened into an unshakable conviction that leaders must learn how to invoke people’s inherent generosity, creativity and need for community. As this world tears us apart, sane leadership on behalf of the human spirit is the only way forward.

Since 1973, Meg has taught, consulted, and advised an unusually broad variety of organizations on all continents (except Antarctica). Her clients and audiences range from the head of the U.S. Army to twelve-year-old Girl Scouts, from CEOs and government ministers to small town ministers, from large universities to rural aboriginal villages. She has served as full-time graduate management faculty at two institutions, Cambridge College in Cambridge, MA and The Marriott Schools of Management, Brigham Young University, Provo, Utah. She has been a formal advisor for leadership programs in England, Croatia, Denmark, Australia and the U.S. Through Berkana’s work, she has advised leadership initiatives in India, Senegal, Brazil, Zimbabwe, South Africa, Mexico, Greece, Canada and Europe.

She is a prolific writer of articles, poems, and nine books, starting with the classic Leadership and the New Science in 1992. Her writings invite us to explore new ways of being and thinking based on wisdom drawn from new science, history, and many spiritual traditions. Her 2017 book is Who Do We Choose To Be? Facing Reality| Claiming Leadership | Restoring Sanity. In Spring of 2020, Meg is publishing a soundtrack with jazz musician and partner in Warrior training, Jerry Granelli. This work is a songline in the Australian Aboriginal tradition that provides guidance and training for those choosing to be Warriors for the Human Spirit.

She has been honored for her ground-breaking work by many professional associations, universities and organizations. For more details see: www.margaretwheatley.com/bios.

Simoon – educated as a welfare manager and human resource developer – has always been intrigued by the question of how to unfold human potential. You may call her a pathological optimist or simply a creative mind always focusing on what is the best possible solution given certain circumstances.

She worked for 12 years in government as a career consultant and later on as an innovation manager. She initiated and lead the first Future Center for government. She started her own business as a consultant in 2007, supporting organizations in change processes, offering leadership programs, training and coaching. Her international career started when she became director of community development for Global Leadership TV in 2010. By that time John P. Milton was her teacher; nature and spirituality became more and more significant in her life. She used Theory U as a change model and framework and succeeded in creating impact in a number of organizations and sectors. Theory U also gave her the language to introduce concepts such as awareness-based systems change and mindfulness in the workplace. In 2016 she started working for the Presencing Institute. For 2 years, she was project manager of u.lab, and it’s Massive Open On-line Course (MOOC) of 185.000 change makers from about 200 countries.Until 2021 she coordinated the global community of “Hub Hosts.” From this experience, her fascination for the potential of community started to grow. Intrigued by Meg’s work for many years, she entered Warrior training in 2018, and since 2019 she works as Program Officer, videographer and community developer for the international Warrior community. She also continues to work on a variety of international change projects in Europe, for example  focusing on climate change, nature restoration, regenerative agriculture, community development and systems change in the built environment and the care-sector.

Simoon lives in the Netherlands, on a small farm in the South, surrounded by her family – including all animals. Her work with horses keeps her grounded, the connection with nature is what keeps her going on. She became beekeeper in 2021 and recently finished the training Permaculture Design and Ecovillages. Her farm functions as her Island of Sanity, with a door always open to the community of Warriors for the Human Spirit. 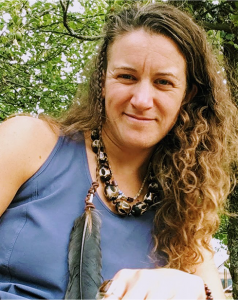 Ellen entered Warriors for the Human Spirit training in October 2015 as a member of Cohort One. In early 2017, she became Program Administrator, responsible for logistics and planning of Warrior trainings, technology, and individual support to Warriors. With her many activities and big heart, Ellen sits at the center of daily operations. She has set up and kept vibrant our global online community (on Sutra), supported Warriors in multiple ways, developed many means for creating communication and community, offered wellness information and coaching to individual Warriors, and now supports Margaret in her work.

Ellen is a holistic health practitioner licensed in massage and craniosacral therapy with training in botanical medicine, as well as an arborist. She is passionate about plants, trees, animals, and helping people connect with their true nature and heart’s calling. As a student and mentee of Char Sundust, Ellen is dedicated to a spiritual path of sharing indigenous wisdom, ceremony, and the medicine way. She teaches workshops focused on healing relationships with self and others through nature and awareness. Her personal practices include the healing power of food, travel, botanical medicine making, and time in nature as a trail runner, rock climber, and bicyclista. Ellen aspires to be a small community medicine woman and educator bridging her deep love of earth with the healing of hearts.