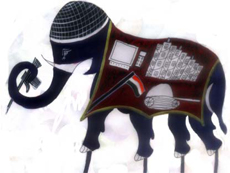 I believe that we are at the point now in the United States where a movement is beginning to emerge. I think that the calamity, the quagmire of the Iraq war, the outsourcing of jobs, the drop-out of young people from the education system, the monstrous growth of the prison-industrial complex, the planetary emergency in which we are engulfed at the present moment, is demanding that instead of just complaining about these things, instead of just protesting about these things, we begin to look for and hope for another way of living…

I see a movement beginning to emerge because I see hope beginning to trump despair. I see the signs in the various small groups that are emerging all over the place to try and regain our humanity in very practical ways.

With these words, Grace Lee Boggs, a 91-year-old activist speaking in recent interview with PBS’s Bill Moyers, described a movement that we call the Now Activism. This is the activism of today, of right now, and it shows up as people everywhere are stepping forward with the leadership they have to offer to make a difference in their communities and organizations. Writer Paul Hawken also explores this new movement in his most recent book, Blessed Unrest:

I sought a name for the movement, but none exists. I met people who wanted to structure or organize it—a difficult task, since it would easily be the most complex association of human beings ever assembled. Many outside the movement critique it as powerless, but that assessment does not stop its growth.

We noticed this new movement as many friends from different parts of the planet began to ask similar questions: What new kinds of activism are required to face the crisis that threatens us today? What are the roots of this crisis? What gives us hope?

At Berkana, this movement reveals itself through the Berkana Exchange, a community of learning centers where people gather to develop their capacity as leaders of community change. In May 2007, nearly 50 people from 14 countries convened in Greece at the newest learning center for our annual Art of Learning Centering. We explored our identity as changemakers, our choices about language, the similarities and differences in our practices. We knew we recognized each other; how to name this recognition was elusive.

In support of this challenge of naming the movement, Shikshantar, one of the founding learning centers of the Berkana Exchange, took the lead in assembling a collection of more than 50 stories and essays which explore this Now Activism. Publication of this booklet comes as we begin the celebration of the 100th anniversary of Hind Swaraj, written by M.K. Gandhi in 1909. At its release, and still today, Hind Swaraj represented a significant effort to reorient the fundamental direction of the Indian freedom struggle. It offered to Indians and to the world a unique analysis of the crisis in India as a civilizational crisis, and it also suggested the deeper purpose behind the struggle to be free of British rule and institutionalization.

Several people have called Gandhi an “epochal man,” that is, someone who was deeply concerned with linking his own life to the specific challenges of the age he lived in. His assumption was that each age has its own peculiar problems and opportunities. Gandhi dedicated himself to constantly engaging in personal experiments to deepen his understanding of truth. Indeed, Gandhi’s activism pushes us to think in terms of both the Self and the System, as well as to make connections between our means and ends.

What are the peculiar problems and opportunities of our age? In service of this inquiry, we offered the following questions to circles of friends around the world:

Many people wrote their own responses, while others shared stories, essays and quotes that they found meaningful for this dialogue. This booklet is an invitation to join with us in an unfolding dialogue. We invite you to review the materials assembled so far and to make your own contribution. We know there are many stories from all over the world waiting to be told. You can download the booklet and make recommendations for additional materials by writing to Manish Jain.

The Now Activism dialogue was also hosted by CEDI/Unitierra and World Cafe.

Manish Jain is co-founder and coordinator of Shikshantar in Udaipur, India. He is one of the original “walkouts,” having abandoned successful careers in international finance, global consulting on education, and service in a top UN agency because he believed none of these were places where he could create real change. Manish is also Chief Editor of Vimukt Shiksha, a publication dedicated to developing learning systems that liberate the full potential of human beings.

Robert L. Stilger is the Co-President of The Berkana Institute and co-directs the Berkana Exchange. Since the 70s, Bob has been a social entrepreneur and has launched and directed a number of nonprofit corporations. He has supported and mentored the development of six Leadership Learning Centers in Africa, Europe and India. These centers were the subject of his doctoral thesis at the California Institute of Integral Studies.